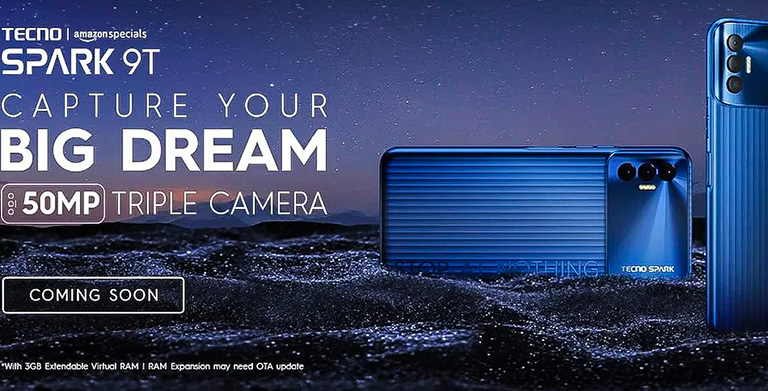 Since the smartphone’s Amazon landing page has gone up, it is confirmed that the Tecno Spark 9T will soon be released in India. Although the landing page does not specify the precise launch date, it does list some of the handset’s characteristics. It will, it has been revealed, have a 6.6-inch full-HD+ display with a water-drop notch. For locking and unlocking the phone, a side fingerprint scanner will be added. In Nigeria, the Tecno Spark 9T was introduced in June of this year in supposedly four color variations.
India Tecno Spark 9T cost and availability (expected)

The handset will soon make its debut in India, according to the Amazon landing page for the Tecno Spark 9T. Unfortunately, neither the manufacturer nor Amazon has made a formal announcement regarding the cost or the debut date in India.

According to the Amazon home page, the Tecno Spark 9T will have a 6.6-inch display with full-HD+ resolution and a water-drop style notch to house the selfie camera. The MediaTek Helio G35 SoC, along with 4GB of RAM and 3GB of expandable virtual RAM, will power it. It will have 50-megapixel triple rear cameras, together with an LED flash, as its optics.

With the capability for 18W fast charging, the forthcoming Tecno smartphone will have a 5,000mAh battery. According to the manufacturer, the smartphone can charge up to 50% in less than an hour. Additionally, a side fingerprint scanner will be added to the Tecno Spark 9T to lock and unlock the phone.

The Tecno Spark 9T landing page has confirmed the aforementioned specifications, which appear to be different from the phone’s Nigerian counterpart. The smartphone had a 13-megapixel dual rear camera arrangement when it was first introduced in Nigeria, along with a MediaTek Helio G85 SoC.