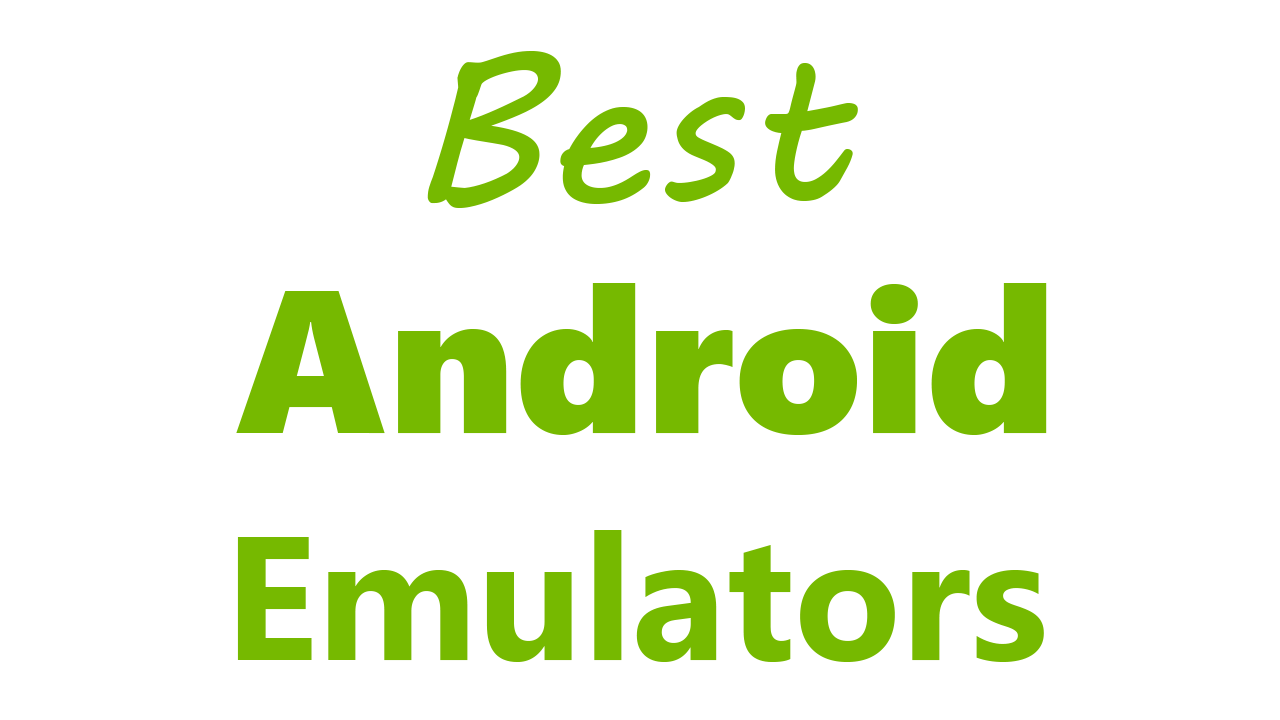 There is no good or bad program actually because it all depends on your preferences and requirements. Therefore, the best way to choose the best Android emulator for you is to decide what you actually want to do on that emulator?

To make this decision easier for you, we have categorized the best Android emulators based on various platforms, hardware, games, and more. Just scroll the list and you will hopefully find the best emulator according to your choice and preferences.

Windows OS is the best platform for gamers. If you are a gamer then Windows is the most recommended operating system for you. It can run almost any game, either directly or using an emulator. Although there is a huge collection of games developed for Microsoft Windows, you can play the rest of games on Windows OS using an emulator.

No only Android, but you will play Xbox, PlayStation, Nintendo, and other console-based video games on Windows using an emulator, if there is no separate Windows based version of that game available. No other operating system offers such power and flexibility for games.

It means if you have only a Windows machine (PC or laptop) and don’t have an Android device or game console, all you need is download and install an emulator for that specific device, and you will have your hands on your favourite game.

All popular and even unpopular Android emulators are available to play Android games on Windows OS. Here is a list for you.

Windows 11 has revolutionized the desktop environment with its most modernized features. Microsoft has designed and optimized Windows 11 as the best desktop operating system for gaming. Now the gamers have a lot of built-in features for high quality and accelerated gameplay. Windows 11 supports DirectX 12 Ultimate that makes best use of GPU and other hardware of PC and laptop. Though Windows 11 has built-in support to play Android apps and games on PC, Android emulators are still on the next level with their performance and features that are years ahead of Windows 11 pre-built emulator for Android games.

Windows 10 has been most popular desktop operating system after Windows 7. Though it had issues, the regular updates made not only usable but one of the most suitable OS for gaming. Till now, Windows 10 has become fully matured operating system for playing games on PC. Unlike Windows 11, Windows 10 does not have built-in support for playing Android games and apps on PC, but it has powerful features to empower Android emulators.

We personally found Windows 8 and Windows 8.1 not a fine-tuned operating system for gamers. The main reason is lack of hardware support. Honestly, Windows 8 was a flop experiment that could not be fixed even by the Windows 8.1 update. Anyhow, this is our personal experience that you might not agree if you are having a pleasant experience with this OS. The good news is that you can enjoy Android games and apps on Windows 8 using emulators.

Windows 7 has been a champion since its release, and still having a lot of machines powered by Windows 7. If you have Windows 7 and want to play Android games and apps, you will be pleased to know that Windows 7 actively supports almost any Android emulator without any major issue. Windows 7 supports DirectX 11.2 that is sufficient to handle an emulator.

Windows Vista was like an experimental version of Windows 7. Though loaded with lots of beautiful graphics and modern UI, this OS wan not so successful as it supposed to be. If you are among the those very few people who love the beauty of this OS and want to play Android games on Windows Vista, you should try Android emulator.

Microsoft gifted the world of computing with Windows XP. It had no competition, an undisputed champion of all computers operating systems. XP rules the computers for years. People still love it and use it on old computers and laptops, mostly not compatible with modern hardware. If you want to play Android apps and games on Windows XP, we suggest you try browser-based or online Android emulators.

Windows 2000 (aka Windows 2K) was not a good operating system for playing games. It lacked games support and seriously built for office use because of its very hard security approach. The people who choice Windows 2000 don’t play games on it. If you still want to play Android games on Windows 2000 PC, the best option is to play in a web browser or use an online emulator.

We are sure if you still use Windows 98, it’s all your love for it. We appreciate it. We also have beautiful memories with this adorable OS. If you have Windows 98 or Windows 98 SE installed on your PC, we are sure you won’t like to play Android apps and games on Windows 98. This beautiful OS does not bear any Android emulator or anything that violates the classic memories. Just forget everything and feel the pleasure. You’re a lucky man, seriously.

Windows 95 does not support anything like Android emulator or so, even no support in web browser. If you love Windows OS to this ancient level, thinking of Android will violate your loyalty for Windows and PC. And Windows 95 has no way to let you play fouls. Cheers!

Mac users usually are not fond of gaming, but it is not conditional. It means you can be a macOS user and a gamer without any solid reason. Android games and apps are fun and can do things that are not possible on macOS.

Please don’t be confused with macOS and iOS. MacOS is a desktop operating system for Apple computers and MacBooks, while iOS is a mobile OS for Apple iPhone and iPad. Running Android on an iPhone or iPad does not make a good sense because they already have iOS with a similar functionality and app market just like Google Play Store on Android devices. Therefore, you should consider playing Android apps on a MacBook, iMac or other macOS devices.

Smartphones have had an influence on nearly every element of our socio-cultural movements since their entrance into our lives. Many Linux power users like the option to run smartphone apps directly on their computer. The Linux environment is also used by Android, the world’s most popular smartphone operating system, to achieve its aims. Android emulators are computer programmes that allow you to use your Linux system to run your favourite Android apps or games. We’ll go through the top 10 best Android Emulators for Linux that you can use right now to run Play Store apps on your Linux laptop in this post.

Best Android Emulator for your CPU

A computer’s central processor unit (CPU) is the component that receives and executes instructions. The CPU of a CAD system is essentially its brain. It has an arithmetic and logic unit (ALU), a control unit, and several registers. The CPU is commonly referred to as the processor. The ALU performs arithmetic, logic, and related operations in accordance with the programme instructions.

Best Android Emulators according to your system RAM

Best Android Emulator according to People and Professions